For Londonderry on the Tred Avon resident, Sheila Wheeler, caring for animals is just in her nature. When she retired to the Londonderry community eight years ago, she noticed that there were between 30 and 40 feral cats living in a vacant lot across from Londonderry on Port Street in Easton.

Sheila comments, “A couple of the cats were living in the drainage ditch on Port Street and when it rained and flooded the cats had nowhere to go. I approached a local resident who lived nearby about beginning to feed the cats on his property. I soon realized that the cats really needed to be neutered and better cared for.”

Wheeler contacted TomCat Solutions to have the cats and kittens trapped and neutered. TomCat Solutions is a group of experienced Trap-Neuter-Return (TNR) volunteers who have made a commitment to curb cat overpopulation by providing continued TNR and adoption to good homes and barns on the Upper Eastern Shore. According to Sheila it took three days to get all of the cats trapped. Ursula Dicks of TomCat Solutions was instrumental in getting the cats trapped and taking them to be neutered. Many of the kittens that were trapped and neutered later were adopted through the organization. Seven of the cats went to the Good Shepherd Cat Sanctuary in Delmar, MD.

Because the organization was not able to find homes for all of the cats, some of the cats came back to their home on Port Street. TomCat Solutions provided cat houses and straw bedding for the animals to live comfortably. Another cat lover, Londonderry employee Gail Graham of Easton, noticed Wheeler feeding the cats on Port Street and offered to help out. When Wheeler broke her hip four years ago, Graham stepped in and began feeding the cats full time. Today, there are five cats remaining in the vacant lot, which are cared for by Wheeler and Graham. Wheeler donates five large bags of cat food each month and Graham feeds the cats.

Some of the cats, known as Blackie, Silver, and Shy Cat, have gotten familiar with Graham and come up to her when she fills their bowls each morning. Graham, who never misses a day caring for the cats, comments, “When it snows, I shovel a path to their feeding area and make sure they are doing alright. I always report to Ms. Wheeler how they are doing.”

This is one of the many volunteer services Londonderry residents provide to the community throughout the year. For information about living the active life at Londonderry on the Tred Avon, contact Rachel Smith at 410-820-8732 or visit Londonderryonthetredavon.com. 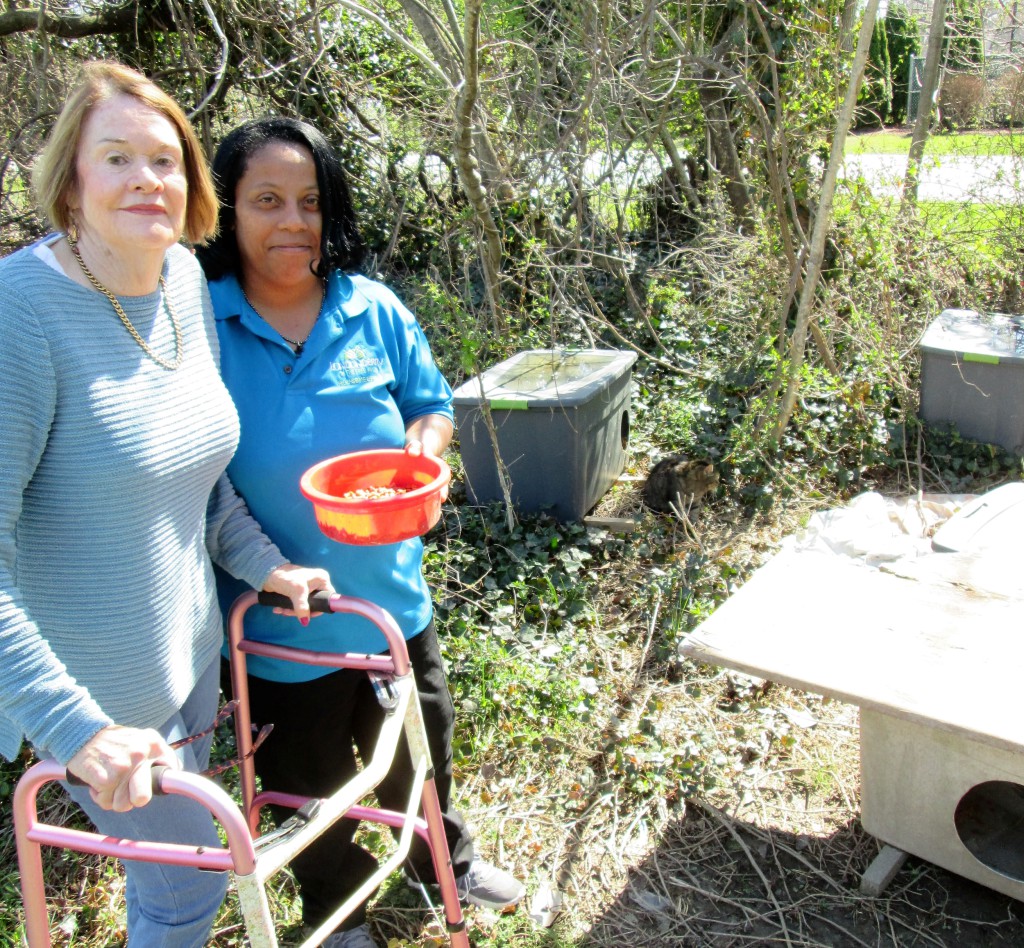 Pictured left to right are Londonderry on the Tred Avon resident Sheila Wheeler with Londonderry employee Gail Graham. The two women have been committed to caring for a feral cat population on Port Street in Easton.