Residents at Londonderry on Tred Avon recently participated in Cruise Week in celebration of Active Aging Week. The week-long celebration centered around the community center featuring a different themed port each night, specialty drinks and menus, and entertainment and activities.

The idea grew out of a resident survey conducted in the summer by Executive Director Irma Toce. She wanted to get Londonderry residents thinking about what are some of the things on their “bucket lists” as she was preparing the residential community’s fall celebration for Active Aging Week. Toce recalls, “My intent was to zero in on one activity, like hot air ballooning, that we could host here in the fall. Instead, the number one activity our residents wanted to do was to take cruise somewhere.” She adds, “Since I couldn’t give everyone a cruise who suggested the idea, we chose to host our own Cruise Week at Londonderry.”

Kirsten Mullins, Londonderry’s Dining Room Supervisor, too the Cruise Week idea and ran with it, creating a week of dinners organized around different ports of call, including Jamaica, Mexico, the Caribbean, and Hawaii. Irma states, “Typical of a cruise, it was a floating buffet with a different port each night. The food and themed decorations in the Community Center, along with the staff attire were the highlights of the week.”

Mullins researched each port incorporating each country’s flag into the decorations, as well as created specialty drinks for cocktail hour. Staff shopped Goodwill for their cruise attire – wearing Hawaiian-style shirts and leis and formal wear on each of the special nights. She comments, “I took my cruise experience to create the right atmosphere and Allan Sorrell Lynch, Londonderry’s new Director of Dining Services, created amazing menus to correspond to each port’s theme.”

Mullins concludes, “Once the week got going, the residents really got into the activity. By Friday, they were begging us for another Cruise Week.”

Pictured are Londonderry on Tred Avon residents participating in a flower arranging workshop for Cruise Week, a week-long celebration for Active Aging Week.

Pictured is Londonderry on the Tred Avon resident Barbara Roach. 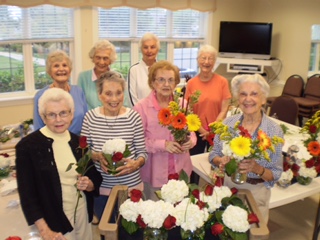