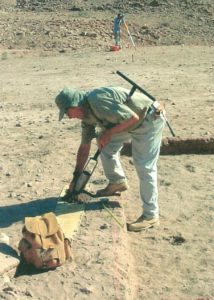 Londonderry resident Dr. J.E. Foss is pictured digging at Petra, a historical and archaeological city in southern Jordan. Foss recently presented “Soils and Archaeology: From Pompeii to Guatemala,” to fellow residents at Londonderry on the Tred Avon.

Londonderry on the Tred Avon residents were recently treated to a lecture on soil science and archaeology by Dr. J.E. Foss, professor emeritus at the University of Tennessee.

Presented at the end of May, the program was titled “Soils and Archaeology: From Pompeii to Guatemala,” and gave residents a look at a number of archaeological sites Foss has had the opportunity to work at as a soil scientist. Over the past 30 years, he’s worked to help do things like date sites and examine contamination in places like Puerto Rico, Central America, Italy, Jordan, Albania, Tunisia and Greece.

“Soils are different all over the world,” Foss, a Londonderry resident of about six months, said. “I bounced around quite a bit.”

Foss’ work has taken him to sites both commonly heard of, like Pompeii, and those less name recognizable, like Mitrou and Petra. Though some of the residents at Foss’ lecture had actually visited Pompeii themselves — he calls them a “well traveled group” — they still showed a lot of interest in the historical aspects of his presentation.

“They were especially interested in the Mayan sites in Guatemala, El Mirador,” Foss said. “Everyone has a natural interest in archaeology — where do we come from, what’s the history, that sort of thing.”

Foss hopes to organize a trip in the future for residents to visit an active archaeological dig. He says he’d also like to present other lectures specific to some of the interesting sites he’s worked.

Londonderry on the Tred Avon is an intimate residential cooperative community for adults ages 62 and up, offering a variety of housing options from convenient apartments to spacious cottages among 29 acres, including 1500 feet of waterfront shoreline. For more information, click here.