Love is in the air at londonderry on the Tred Avon

What do pilots and flight attendants have to do with Valentine’s Day? Plenty, if you are a resident at Londonderry on the Tred Avon. Love is “in the air,” literally, at this retirement community, where a number of residents are remembering their years as pilots, and some as flight attendants. Two residents, Clint “Bus” Brown and Margie Blood recently reminisced about their time in the air and independently some of the romance that ensued.

Margie Blood, age 87, was destined to fly. Her father, a World War I pilot, said his youngest daughter was going to be a pilot and sure enough, at age 21 Margie got her pilot’s license. She began, however, as a flight attendant, then known as a “stewardess” with TWA as that was the only option for women at the time. Margie recalls, “To be a stewardess, the airline required you be under five feet four inches tall, weigh no more than 110 pounds, be over 20 years of age, have a college degree or RN, wear no glasses, not be married, pass a physical and eye examination, be attractive and have a good figure.”

She added that the stewardesses also had eight weeks of training in deportment, waitressing, psychology of relating to strangers, first aid, emergency procedures, physical exercises and body and arm movements that exemplified femininity. And of course, they had to learn how to make a perfect martini, pop champagne corks and serve caviar – haven’t times changed!

One night in 1948 while working as a first year stewardess on a flight from Kansas City to Pittsburgh, Margie began talking to one of the male passengers on the flight. She states, “He asked me to ask the pilot to make a three-point landing and I told him that was impossible as we were flying a DC-3 and that a three-point landing could not be done. He was impressed with my knowledge and I share with him my father’s love of flying and that someday I would get my pilot’s license.”

She then learned he was a World War II test pilot who was on active reserve at the McKeesport Airport and was just trying to stump her. The next day after Margie landed she went to be reviewed on her takeoffs and landings in a Piper Cub air craft. The review would count towards her pilot’s license. The man from the plane the night before surprised her and had arranged after his flight to be her reviewing flight instructor. Margie comments, “It was such a shock when I introduced myself and found out that he was the man who would be reviewing me. I knew at that instant I was in love with him!”

The feeling was mutual and Bill Blood and Margie Blood were married in 1949. Because stewardesses could not be married, Margie could no longer keep her job. She did, however, complete her pilot’s license – something both Bill and her father shared pride in. The couple was married for 45 years, having five accomplished children, one of whom works as a “check stewardess” for United Airlines, validating a new flight attendant’s performance on his or her first international flight. She has spent 33 years with United Airlines and her experience has included working on government flights transporting soldiers to combat areas and then returning them home to the United States.

When asked about the secret to a happy marriage, Margie comments, “The essence of a good marriage is that we affirmed each other and shared a sense of humor. It got us through the hard times.”

For Clint “Bus” Brown, flying was his life. At age five, his father took him and his brother to the airport to kill time while their mother was delivering their sister. As a child, he also remembers American Airlines flying over his school near Niagara Falls, NY. He recalls, “I was fascinated with what was in the air.” At age 19, while World War II was going on, Bus jointed the Navy with the desire to get his wings. He succeeded in doing that in Pensacola, FL in 1945. By this time, the war was winding down and he and a buddy found out that decisions were being made about whether they would become flight instructors or actually get to fly in the war efforts. Both were adamant about seeing “action” and sent a bottle of champagne to each of the Navy WAVES who would be making the decision about their futures. Bus quips, “It must have worked because we both got to fly in the war!” Bus was assigned to an aircraft carrier which did anti-submarine patrol in the Atlantic Ocean. He flew Grumman Avengers, which had originally been torpedo bombers in the Pacific Ocean.

Bus didn’t marry a Navy WAVE, but ended up marrying Jane, “the girl next door,” after returning home to New York after the war. He went on to have a career in the roofing manufacturing industry and specialty paint business. He and Jane have been married 64 years and have four children.

Several residents of Londonderry on the Tred Avon not only watched the changes in the airline industry, but participated in its development. Many served in positions related to flying, both in World War II and in the Korean War – serving as pilots and bombardiers, as well as testing aircraft and working as air traffic controllers and in research and development for manufacturers. Recently, these residents enjoyed reminiscing about their experiences, many commenting that air travel today isn’t like it used to be. They remembered flying in Boeing 247 airlines that could accommodate only 10 passengers, as well as the luxury of Boeing 747s, which could accommodate 450 passengers – to having real cream served in small silver pitchers with their coffee and cocktail stirrers shaped like bright red propellers in their drinks.

Margie Blood, who has “b17” in her email address, concludes, “It was an exciting time to be involved with air travel.” 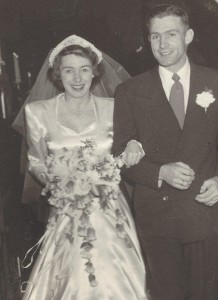 Bill and Margie Blood on their wedding day in a blizzard in December 1949.